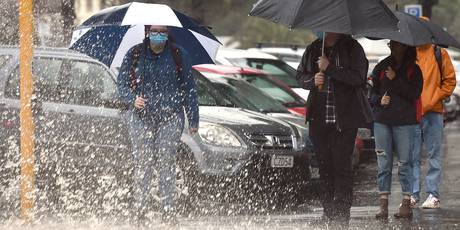 The North Island is bracing for a two-day deluge with warnings of floods and slips as more than 100mm of rain is set to drench previously flood-ravaged parts.

And eastern regions are being told to keep watch for large seas tonight with 3.5m waves expected to crash on to the Tairawhiti coastline.

Rain is now falling with forecasters expecting it to inundate much of the island across the day. Eastern and northern regions are being warned to brace for heavy downpours.

Today MetService upgraded a rain alert for Hawke’s Bay to a heavy warning, while rain watches remained in force for Coromandel Peninsula, western Bay of Plenty, Gisborne and the Tararua District.

Niwa says rain, at times heavy, will impact the eastern and lower parts of the North Island later today and tomorrow.

Rain, some heavy, will impact the eastern and lower parts of the North Island later Thursday & Friday.

Localised flooding and slips are possible, especially where the heaviest rain occurs. pic.twitter.com/tjwgRytKVp

It’s warning that localised flooding and slips are possible, especially where the heaviest cloudbursts occur.

The Gisborne region, already walloped by earlier winter storms, is set to be saturated with more than 100mm of rain to fall by midnight Friday.

The rain, which started falling before lunchtime in the north, is expected to continue until it clears on Saturday.

Earlier this year the Tairāwhiti region was plunged into a state of emergency when record rainfall saw widespread flooding that left roads impassable and properties damaged.

Rivers burst their banks and evacuations took place across the region as days of rain led to a level of saturation locals described as “biblical flooding”.

The latest heavy rain coincides with the arrival of the spring equinox.

The astronomical phenomenon will take place at 1.03pm tomorrow.

Weatherwatch said it marked the point of longer days and shorter nights.

“The days will continue to get longer up until the longest day of the year, three months from now on December 22nd,” said weatherwatch.co.nz.

Meanwhile, next week warmer than average temperatures are expected to sweep across the country, with sub-tropical winds making temperatures feel more like November than September.