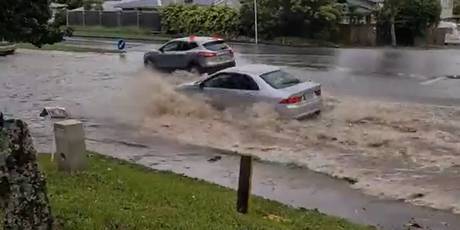 After thunderstorms swept through the Auckland region last night, wreaking havoc on roads, MetService is advising the country could be in for another wet afternoon as thunderstorms are forecast for most of the country.

In the Coromandel Peninsula, Waikato and Bay of Plenty areas, a severe thunderstorm watch was issued by MetService this morning, around 10am.

MetService is advising that if these regions are hit with severe thunderstorms, they could see damaging wind gusts of 110 km/h or more, large hail that is 20mm or more in diameter and the possibility of small tornadoes.

Wind gusts greater than 110 km/h in strength can cause some structural damage, including trees and power lines, and may make driving hazardous. If any tornadoes occur, they will only affect very localised areas.

There are scattered showers, some heavy, forecast for Northland, Auckland, Hawke’s Bay, Wairarapa and Manawatu to Wellington with a chance of hail and thunder this afternoon and evening.

Another showery 💦 day today with more ⚡ thunderstorms ⚡ from afternoon.

The low finally moves over us today, but instead of a high the next pattern will be westerlies and a series of fronts for the next few days.

Don’t put your umbrella away yet!

In the South Island, Marlborough and Nelson are expecting rain turning to scattered showers in the late morning, with some heavy showers and thunder forecast inland this afternoon and evening.

In Canterbury, Otago and Southland, cloud and patchy rain are expected to clear towards midday before more potential heavy showers and thunderstorms will hit this afternoon.

Central Auckland received its first dose of rain around 6.30pm when it was pounded with a short, powerful deluge.

Over and east of the Auckland CBD. pic.twitter.com/dw5BuuCLUm

Fire crews responded to more than 50 weather-related incidents from Hatfields Beach to Manukau, including trees that have blown on to houses, trees down across roads, water entering property, and loose roofing iron.

There were reports of flash flooding as well as hail, thunder and lightning. Some roads became “rivers of water” while a video posted to social media appears to show water pouring through the light fittings at one of the region’s busiest hospitals.

There was also at least one report of a sprinkler having been set off by water coming in through the ceiling, and multiple other alarms that have been set off by the weather.

Savage wind gusts and downpours are forced people to take cover in nearby shops.

strongly advise if you’re planning to head out in auckland rn to simply not pic.twitter.com/3ihHG5ULFj

The National Emergency Management Agency advises that as storms approach you should:

MetService advises that during and after the storm, you should also: