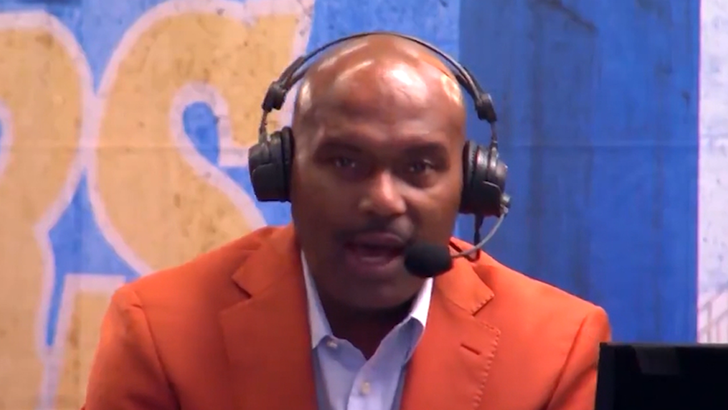 Tim Hardaway was forced to issue an apology on Monday night … after he disturbingly compared a player’s rough defense to rape during the middle of a Warriors game.

The former Golden State superstar was in the TV booth for the team’s special “Run TMC” broadcast — which featured Hardaway, Chris Mullin and Mitch Richmond instead of the Warriors’ regular announcers — and a little more than halfway into the game, Tim put his foot squarely in his mouth.

While trying to talk about how he felt a player crossed the line on defense during the Warriors’ matchup with the San Antonio Spurs, he shockingly said, “See, ya’ll thought that was great D, I thought that was just raping him.”

He added, “I think he should have called the police on that.”

The other members of the broadcast booth quickly tried to move on … but viewers were so outraged and appalled by the remarks, Hardaway had to issue a mea culpa just a few minutes later.

“Hey everybody,” he said as the game headed into the fourth quarter. “I used a poor choice of words earlier in the broadcast. I want to apologize for that. And, you know, let’s get back to the game. And, let’s finish this game off with a 30-point win and go home happy.”

No word yet from the Warriors if there will be any punishment coming for Hardaway.

Of course, this is not the first time the 56-year-old former basketball player has offended with his words — back in 2007, during a talk on “The Dan Le Batard Show,” he infamously said, “I hate gay people.”

Hardaway eventually apologized for those comments.

Tim played in the NBA from 1989 to 2003. He was inducted into the Naismith Basketball Hall of Fame earlier this year.