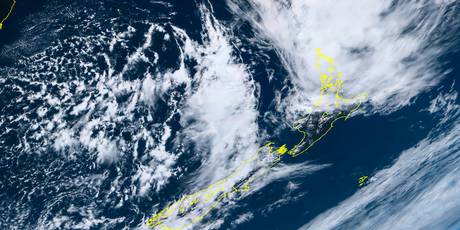 Auckland commuters are bracing for a rush hour deluge as “nasty” thunderstorms approach and prepare to lash the North Island.

About 1350 lightning strikes were recorded in the hour from noon over the Tasman Sea.

Torrential rain will persist until a brief reprieve tomorrow, with the heaviest downpours expected over the city during rush-hour traffic this afternoon.

There are also strong wind watches for Northland, Auckland, Coromandel Peninsula, Bay of Plenty and Gisborne, beginning at 7pm today.

Almost a dozen weather warnings and watches were put in place nationwide from this morning until Thursday.

A severe thunderstorm watch is in force from 2pm to 10pm, spanning Northland to Whanganui.

The National Institute of Water and Atmospheric Research (Niwa) said, “some [of the thunderstorms and showers] could be nasty”.

Over the past hour, from noon to 1 pm, around 1350 strikes have been observed over the adjacent Tasman Sea waters.

Showers & thunderstorms are expected this afternoon & evening for parts of the North Island.

Some could be nasty. pic.twitter.com/5HKhK38Kvw

MetService forecast gusts over 110km/h and “a few small tornadoes” in isolated areas during this warning period.

The gales and possible tornadoes could make driving dangerous and damage buildings, trees and power lines.

The heavy rainfall could also cause flash flooding about low-lying areas like streams, rivers and narrow valleys. The downpour could also lead to land slips.

The electrical storms are approaching the top of the country as two jet streams – one from the tropics and the other from Antarctica – merge, unleashing days of thunder, gales, rain and even snow.

The climate drivers behind this are a negative Indian Ocean Dipole & La Niña, both of which have enhanced regional moisture availability. pic.twitter.com/0ekQpqdaaY

No part of New Zealand will be spared with the volatile cocktail set to sweep over all regions, and last until Friday.

MetService meteorologist John Law explained this was due to “a deepening area of low pressure” set to barrel over the North island Tuesday morning, bringing a period of heavy rain, thunderstorms and strong gusty winds with it.

“The extra warmth and humidity that we’ve seen over New Zealand these last few days has helped to spark off some very active thunderstorms, and we are likely to see some more thunderstorms today and Tuesday,” Law said.

Heavy rain, thunderstorms and strong winds for many places on Tuesday and Wednesday.

Law warns that the thunderstorms are “likely to bring some damaging winds and downpours” and areas such as Gisborne and the Bay of Plenty can expect up to 35mm/h of rain during downpours.

Most of the country is this morning under weather alerts, including 4m-high waves set to pummel the Wellington western coastline and snow to cover the Southern Alps.

A heavy rain warning has been issued for the eastern Bay of Plenty and the ranges of Gisborne.

Heavy rain watches have also been issued for Northland and the Central High Country across to Taranaki in the North Island.