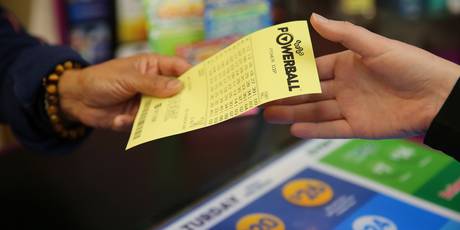 A man who won a $24 million jackpot last Saturday only found out yesterday morning he was the lucky player when he had his ticket checked.

The New Plymouth man who wishes to remain anonymous celebrated his win with “a spicy takeaway and a couple of beers”.

He is a regular player who picked up his ticket earlier that week on a trip into town.

“I picked up my usual Triple Dip ticket while I was running some errands in town.”

The man had not heard that Powerball had been won, and wasn’t in a rush to check his tickets, only realising on Wednesday morning when he went to grab breakfast.

“I opened the pantry to decide what I wanted to eat and noticed my ticket sat there, so I thought it would be a good time to check it.

“I pulled out my phone and went to the website to check the winning numbers, I was drawn to the bottom of the ticket and once I realised I had three numbers, my eyes were skipping ahead trying to finish checking it quickly,” he said.

“I saw I had all the numbers… and then the Powerball, number five jumped out at me.”

The man got in his car and headed to a Lotto store to check his ticket.

“When I pulled up, I saw a sign in the window saying that night’s prize was back to $4 million, that’s when it started to feel real.

“Fortunately, there was no one in the shop so I handed my ticket over and the lady put it through the machine. Without even saying anything she showed me the prize on the little printout and smiled – I didn’t know what to think.

“It’s hard to describe how I was feeling, I think I was so focused on filling in the paperwork and making sure it was confirmed that my mind couldn’t really process that I had won $24 million – the odds are so low, I kept thinking, how jammy is that.”

Arriving home, the man said he took some time to sit and think about his win, but hunger got the better of him and he decided to drive back into town for some lunch.

“It was a funny drive, I passed some lovely houses and thought ‘I could buy one of those right now.

“Same with car showrooms, I’ve never been the kind of person to want extravagant things – it’s not me, but I just kept thinking how nice it would be to drive around in a flashy red sports car.

“Everything was suddenly possible, and my mind was in overdrive.”

Later that evening, he decided he needed to have a little celebration, the man said.

“I finished work and went to grab a spicy takeaway and a couple of beers. I took them home and celebrated being a millionaire, it felt good to relax for a bit.”

The man said he is looking forward to his future and is already planning what that might look like.

“First I would like to get away and decompress for a little while, so I think I’m going to book myself a holiday somewhere warm and sandy,” he said.

“In the future, I would like to buy some land and a property somewhere in New Zealand, but I definitely think travel will be a big part of the next few years for me.”

The multimillion-dollar ticket was purchased from Bell Block Supermarket in New Plymouth, and was made up of $1m from Lotto First Division and $23m for Powerball.

He is the 17th person made a multi-millionaire from Lotto this year.

“It is four of us working in the store and usually I am on the shift when most tickets are sold.

“I have a feeling it has gone from my hand. So I am really excited to see who won.”

The mouth-watering sum was up for grabs in Saturday’s Super Saturday Lotto Powerball draw.

Nobody won Strike Four so that $300,000 jackpot will now move to Wednesday night.

It is the second biggest Lotto win this year. This year’s biggest winner was an Auckland grandmother who took home a whopping $28.1 million in late March.

The jackpot-winning ticket was bought from Meg Star in Henderson, and the woman only realised she had won while she was out shopping and had decided to check a few tickets she had piled up.