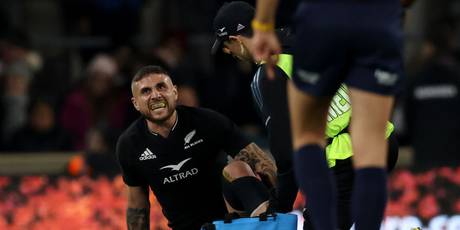 By Liam Napier in London

TJ Perenara will be sidelined for up to nine months after rupturing his Achilles in the closing stages of the dramatic draw with England at Twickenham to throw the battle for the All Blacks halfback roles wide open.

Perenara was injected for Aaron Smith in the 64th minute of the All Blacks’ deflating 25-all draw against England but in the dying stages he collapsed to the turf and had to be helped from the field.

Speaking one day after the match, as the All Blacks prepared to travel home from London following their final test of the year, Ian Foster confirmed the worst-case injury for Perenara.

Recovering from such an injury usually requires nine months, leaving Perenara in a race against time to prove his fitness before the All Blacks opening World Cup match against France in Paris on September 8.

“I wouldn’t say that but we’re gutted for him,” Foster said. “It’s the 78th minute and he’s innocuously gone to chase a kick and it’s gone bang which hurts.”

The injury is a cruel blow for Perenara after he worked hard to fight his way back into the All Blacks squad, playing his first test in one year off the bench in Edinburgh.

This year Perenara reacted to missing All Blacks selection by claiming the Jubilee Cup title Wellington club side Norths as well as the NPC and Ranfurly Shield crowns with Wellington to ultimately earn an All Blacks recall.

After playing the final two tests of the year for the All Blacks off the bench, this latest significant setback poses another challenge for the 30-year-old to try to overcome.

Highlanders halfback Folau Fakatava, who played two tests off the bench against Ireland in July before rupturing his ACL, has opted for non-operative rehab in a bid to prove his fitness before the World Cup. Given the severity of the injury, there are no guarantees that approach will pan out.

The absence of Perenara and Fakatava for the majority of Super Rugby next year may ultimately enhance Brad Weber and Finlay Christie’s cases behind incumbent Smith.

When the time comes to select their World Cup squad, the All Blacks will need to whittle those five contenders into three.