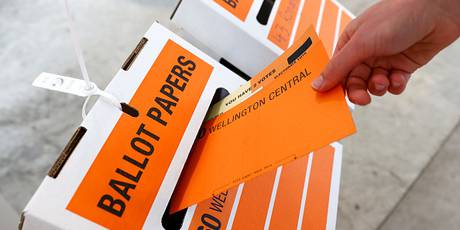 The voting age for local government elections looks likely to be lowered to 16, with 50 MPs in Parliament expressing support for change and 45 opposed.

Thirty-eight Labour MPs and all 10 Green MPs support a lower age. Both Te Pāti Māori’s MPs are likely to vote for a lower age.

Sixty-one votes will be needed to change the voting age for local elections – Parliament will have 120 MPs once the Hamilton West by-election wraps up next month. That means just 11 more “yes” votes are needed to lower the age.

If the 22 Labour MPs yet to declare a voting intention were to split along the lines of their colleagues who have declared, the bill would pass.

In the “noes” column are National’s caucus of 33 MPs, who today decided to take a party position and vote as a bloc, and Act’s 10 MPs. Act leader David Seymour says his 10 MPs are likely to vote against the bill, but he personally could live with a lower age of 16 at local government level. Labour MPs David Parker and Willie Jackson have said they do not support a lower voting age. Two other Labour MPs are on the fence.

Parliament has been grappling with the Supreme Court’s decision, issued on Monday, to declare the voting age of 18 in general and local elections inconsistent with the Bill of Rights, as a rights limitation that had not yet been justified.

The Government said it would respond by drafting legislation to lower the voting age to 16 from 18 in local and general elections. Just what that legislation would look like is not clear.

Lowering the general election voting age was kiboshed early, with National and Act coming out against such a move, blocking supporters from getting the 75 per cent Parliamentary super-majority needed to change the age without a referendum.

But the local government voting age can be changed by a bare majority – and it now appears there is a probable majority for such a change in Parliament.

This means a single bill to change both voting ages is likely to progress to the committee stage, where the provisions changing the voting age at general elections would fail. The rest of the bill, however, would progress on a bare majority.

Ardern said details, including how the Government will grapple with two voting ages, had yet to be worked out.

After earlier indicating Labour would whip MPs, Prime Minister and Labour leader Jacinda Ardern said she would give her MPs a conscience vote.

“The way we’ll term it is a free vote so people will be able to cast their vote as they choose, which again we think is in keeping with allowing members who may have different views on this issue to vote and in keeping with our view that this is not a Government issue per se this is something for the whole of Parliament,” Ardern said.

Act leader David Seymour said Act will probably vote against changing the voting age at local and general elections, but still expressed some support for the idea.

“I don’t see a huge problem with that,” Seymour said about lowering the local body voting age.

“A bit of training wheels on the local body [elections] mightn’t be a bad way to go,” Seymour said.

“In our view, if there is going to be a lower voting age, it should be at the local government level,” Seymour said.

He said Act’s MPs would be given a free vote, but there was not a lot of support for lowering the age.

“The Bill of Rights reserves voting for Parliament to 18-year-olds; it makes no such reservation for local body [elections] so that would be the place to change it if anywhere,” Seymour said.

Asked if 16 was a good voting age for local elections, Seymour said, “we’d accept that – it’s far from a priority for us”.

National leader Christopher Luxon, whose caucus met today, said National had made a “party decision” to keep the voting age at 18.

“You’ve got to rule the line somewhere, and on balance we think 18 is about right,” he said.

For more from Thomas Coughlan, listen to On the Tiles, the Herald’s politics podcast