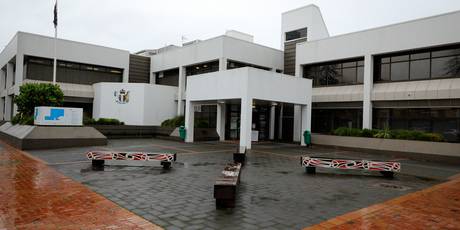 Moetu Kaitai was jailed for life for the murder of Kalvin Kana when she appeared in the High Court at Rotorua. Photo / Andrew Warner

High on methamphetamine and walking around with a firearm, Moetu Kaitai was a “powder keg fuelled with rage”.

Kalvin Kana’s “mild provocations” tipped her over the edge and Kaitai pulled the trigger — shooting him dead in a garage at the rear of a Tokoroa property.

Details of the murder can now be revealed after Kaitai’s name suppression was lifted at her sentencing in the High Court at Rotorua yesterday.

The 31-year-old was found guilty by a High Court jury in August of murder and threatening to kill, relating to offending in May, 2020.

Justice Matthew Muir sentenced her to life imprisonment with a minimum non-parole period of 10 years and nine months.

Just before Kaitai left the dock to be taken into custody, she slapped her chest with her fists towards a public gallery. Her supporters then briefly yelled out Black Power gang chants.

During sentencing, Justice Muir said Kaitai was surrounded by a gang environment.

In her teen years, after becoming pregnant at the age of 15, she was later cared for by uncles who were Black Power members who soon got her involved in drug dealing.

She was a heavy user of methamphetamine and at one point was consuming up to 2g a day.

She had abusive relationships, including one partner who beat her with a crowbar and three others that were described as violent. During one relationship she was dragged from a moving car.

The night before she fatally shot Kana, Kaitai had been attacked by another man in the same garage who had pushed her to the ground.

Justice Muir said Kana was in the wrong place at the wrong time.

“You said in your police interview you were ‘sick of males attacking you’.”

On May 8, 2020, two nights before she killed Kana, Kaitai had been smoking methamphetamine with other women in a car parked in a Tokoroa driveway.

Kana was at the house and had also been using methamphetamine. He approached the car and tried to get their attention.

Kaitai responded by grabbing a sawn-off pistol she had with her in the car, getting out and threatening to kill Kana.

Justice Muir said Kaitai had the same pistol with her two nights later, on May 10, when she went to meet associates at the Tokoroa garage. She concealed the pistol as she sat down at a bar table.

Kana approached Kaitai and they had an argument that involved “low-level contact”.
“I accept he was… ‘in your face and argumentative’.”

Kaitai grabbed the pistol and shot Kana at close range in the torso. He died almost instantly.

“When you were approached by Mr Kana, you could have left the garage, you chose instead to be staunch and demand he go. You asserted your authority over the situation as you had two days earlier by producing and loading a weapon of intimidatory size and calibre and pointing it at the victim.”

Justice Muir said Kaitai had an extensive criminal history involving drugs, violence and dishonesty offences. He said yesterday was her 17th sentencing since 2009.

Members of Kana’s family read emotional victim impact statements to the court, with one describing him as talented, athletic and well-known.

They said they would never forget the day he died — it was Mother’s Day and all the family members’ hearts “shattered to pieces” when they heard the news.

“For two years my family has wanted justice … You have shown no remorse.”

Another relative said to Kaitai: “I try not to hate you because I am trying to be a better person. But you still pulled the trigger so I do.”