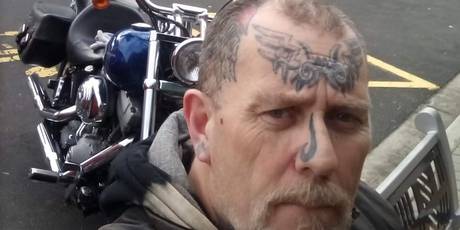 Motorcyclist Sean Carlyle was killed in a crash earlier this month. Photo / Supplied

A father of 14 who died in a Papakura motorcycle crash earlier this month is being remembered as a man who “went against the grain” and loved his children.

Sean Michael Carlyle, 54, died on November 3 after a single-vehicle crash on Papakura-Clevedon Rd near the dog park.

His eldest daughter, Alyshia Carlyle, said motorcycles were in their “DNA” and they meant everything to her father.

“I’m 34 years old and I have photos of me as a baby on my dad’s Triumph with him. He would take my children on the Harley he had the accident in, only 10 weeks ago.

“My children have motorbikes, we have motorbikes, my brothers have Harley-Davidsons; we all grew up riding. My dad has ridden his whole life, motorbikes are his life and that is why none of us understand this accident.”

His death, she said, is “the hardest thing” she’s ever had to go through.

Alyshia was at home on November 3 when two police officers knocked on her door at 11pm asking if she was Alyshia Wardle, a last name she no longer uses.

“They’re like, ‘are you the daughter of Sean Wardle?’ And I was like, Sean Wardle? Because even on his licence he is Sean Carlyle, and I was like, yeah and they were like, ‘sorry he’s been in an accident, and he’s passed away we need you to come away and identify him, you are his next of kin.’”

The news sent Alyshia “into shock”, but she still needed to go to the morgue to identify her father.

“By the time I got there it would have been just before 2 [am], and I had tried to ring my brothers to tell them and I couldn’t talk, so police took the phone off me and told them.”

Her brothers joined her at the morgue, so she did not have to see her father’s body alone.

“Our dad was our world, he was everything to us, he was such a good dad, he loved us. He never, ever judged us. You know we could make the most f***ed up decisions in life and we could screw totally up and dad had our backs no matter what, he was there.”

She told the Herald he was also a great poppa to his grandchildren and they all adored him.

Until now she said he’d never had an accident.

“Part of me is gone, I came from that man. I feel empty, I feel lost, I feel alone. I miss him, I miss his cheeky laugh and big grin.”

She even misses him scolding her over her cigarette use.

Alyshia said underneath his bravado and tattooed face was the most “genuine, accepting, intelligent, personable, charismatic man who absolutely had the gift of the gab”.

For the last two years she said he had been living with her in Waiuku on and off, and even the local shopkeeper cried when her father passed.

“He never judged a soul, he was open about his flaws, he was honest, he was straight up and he would never judge you he was so accepting.”

A Givealittle has been launched to help cover his funeral costs.