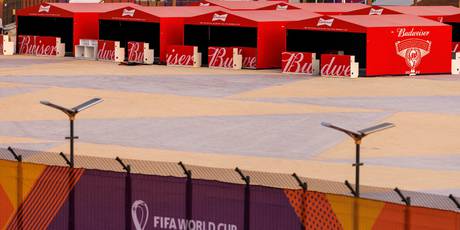 Budweiser tents outside one of the host stadiums in Qatar. Photo / Getty

One of the world’s biggest beer brands has responded after Qatar banned the sale of its drinks in World Cup stadiums – just two days before the tournament begins.

The Muslim nation had promised organisers Fifa it would relax its strict laws to allow fans to drink beer at matches and inside fan zones.

However, despite Budweiser – owned by Belgian beer giant Anheuser-Busch InBev (AB InBev) – having a massive A$112 million (NZ$121.5m) sponsorship deal with Fifa, Qatar has now decided to renege on its vow.

Alcohol is still expected to be sold in corporate zones, which wealthy fans can pay thousands of dollars to enter.

“Following discussions between host country authorities and Fifa, a decision has been made to focus the sale of alcoholic beverages on the Fifa fan festival, other fan destinations and licensed venues, removing sales points of beer from Qatar’s Fifa World Cup 2022 stadium perimeters,” a FIFA spokesman said.

“There is no impact to the sale of Bud Zero which will remain available at all Qatar’s World Cup stadiums.

“The tournament organisers appreciate AB InBev’s understanding and continuous support to our joint commitment to cater for everyone during the Fifa World Cup Qatar 2022.”

On Twitter Budweiser responded to the ban with a simple one line message.

In a more official capacity AB InBev said in a statement that it “looked forward” to its “activations” at World Cup tournaments.

“Some of the planned stadium activations cannot move forward due to circumstances beyond our control”.

Qatar had initially asked Budweiser hoardings to be made less prominent.

The New York Times said the intervention was made by Sheikh Jassim bin Hamad bin Khalifa al-Thani, the brother of Qatar’s ruler.

Fifa could be in breach of its multimillion-dollar contract with Budweiser if it is not allowed to sell its product or have visibility at the matches.

It comes after reports the Qatari Royal Family made a direct request to Fifa for Budweiser to move beer tents away from stadiums to less prominent locations.

The beer giant was seen moving its tents last week.

Budweiser owner AB InBev told Sky News it was only informed of the decision that its branded tents must be relocated eight days before the tournament was scheduled to start.

Middle-age spread: How to reverse weight gain for good