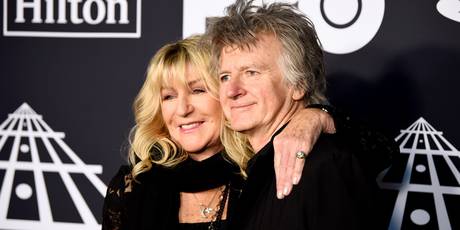 The New Zealand singer-songwriter who is known for being a member of Crowded House, Split Enz (which he co-fronted with brother Tim), joined Fleetwood Mac in 2018 and toured with the band during their An Evening with Fleetwood Mac tour from October 2018 to November 2019.

Taking to Instagram, the star posted a photo of McVie playing on an electronic keyboard and expressed his upset at the “very sad day”.

“It’s a very sad day. Christine McVie was a unique and soulful woman, a supremely gifted songwriter and a warm and wonderful friend.

“I am so grateful to have shared some hours in her beautiful presence.”

McVie’s family announced in a statement this morning she had passed away in hospital following a short illness.

“On behalf of Christine McVie’s family, it is with a heavy heart we are informing you of Christine’s death.

“She passed away peacefully at hospital this morning, Wednesday November 30, 2022, following a short illness.”

They added that she was surrounded by her family at the time of her death.

“We kindly ask that you respect the family’s privacy at this extremely painful time, and we would like everyone to keep Christine in their hearts and remember the life of an incredible human being and record musician who was loved universally.”

They signed the post off by saying “RIP Christine McVie.”

Since the upsetting news was revealed, tributes have started to flow for the Fleetwood Mac co-lead vocalist and keyboardist, including from her co-lead vocalist Stevie Nicks who said she didn’t even know the star was ill.

In a handwritten note posted to Instagram, the singer said, “A few hours ago I was told that my best friend in the whole world since the first day of 1975, had passed away,” Nicks wrote.

“I didn’t even know she was ill… until late Saturday night. I wanted to be in London; I wanted to get to London – but we were told to wait.”

Nicks said that as she waited, a song swirled around and around in her head – Hallelujah, by the band Haim, about the death of a best friend.

Mick Fleetwood also paid tribute with a post on Instagram where he admitted “part of my heart has flown away today.”

McVie joined the popular 70s band in 1975 and quickly solidified herself as a valued member. She also married the band’s bassist John McVie, with their separation — along with the split of Nicks and Buckingham — being famously documented on the 1977 release Rumours, among the best-selling albums of all time.

Other tributes include one from the sister trio band Haim who “with tears in our eyes” made a lengthy post on their Instagram.

The band said the sisterhood between “Stevie and Christine had was so vital to us growing up,” continuing on to say the band had a huge impact on them throughout their lives.

Johnny Cash’s daughter, Rosanne Cash also paid tribute with a post on the social media app and said McVie was a “beautiful presence in Fleetwood Mac.”

Meanwhile, Sheryl Crow – who inducted the band into the Rock and Roll hall of Fame in 1988 – posted on Twitter, sharing “the world feels weird without her here.”

I am so sad to hear of Christine McVie going on to heaven. The world feels weird without her here. What a legend and an icon and an amazing human being. RIP https://t.co/nr6nfZ8rTM

McVie was a steady presence and personality in Fleetwood Mac, a band known for its frequent lineup changes and volatile personalities — notably fellow singer-songwriters Stevie Nicks and Lindsey Buckingham.

During its peak commercial years, from 1975-80, the band sold tens of millions of records and was an ongoing source of fascination for fans as it transformed personal battles into melodic, compelling songs. McVie herself had been married to bassist John McVie, and their breakup — along with the split of Nicks and Buckingham — was famously documented on the 1977 release Rumours, among the best-selling albums of all time.

Fleetwood Mac, co-founded by drummer Mick Fleetwood in 1967, was inducted into the Rock and Roll Hall of Fame in 1998. The group’s many other hit singles included “Dreams,” “Go Your Own Way” and “Little Lies.”