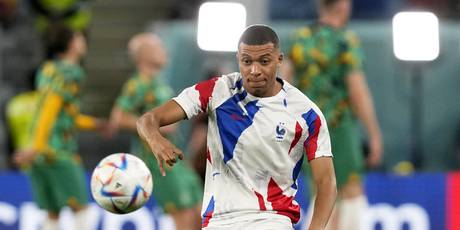 Even without the injured Karim Benzema, defending World Cup champion France has plenty of attacking power.

Most teams would love to have either Kylian Mbappe, Antoine Griezmann or Olivier Giroud in their forward line, let alone all three. They have 119 international goals between them, plus an abundance of speed, craft, experience and skill.

But France does not have the same assurances in midfield, and that is where Australia could trouble Les Bleus on Tuesday in their opening Group D match.

France struggled to beat Australia 2-1 when the teams met in their World Cup opener four years ago, and that was with a full-strength midfield.

France coach Didier Deschamps is missing the injured N’Golo Kante and Paul Pogba — his dynamic engine room from 2018. Pogba has played 91 times for France and one of his 11 goals came in the 4-2 win over Croatia in the 2018 final.

While Pogba’s form has been up and down since then, Kante’s consistency rarely ever dropped and he’s arguably an even bigger loss.

A tireless runner with an incredible ability to close down space, surface from anywhere to win the ball and then release it cleanly, Kante is one of the best defensive midfielders in world soccer. But he’s recovering from a hamstring operation and won’t add to his 53 international appearances.

So Deschamps faces Australia with a revamped midfield where the most experienced player is Adrien Rabiot — Pogba’s teammate at Italian club Juventus — with 29 appearances.

“When I played in the French youth teams, I was often more experienced than my teammates. Now I find myself in a similar position,” he said. “I feel that I’m able to help others, to lead by example. I like being in this position.”

That’s some turnaround for Rabiot, who four years ago actually asked to be taken off the list of reserve players for the 2018 World Cup. He was dropped for more than two years by Deschamps, who called his decision “a huge mistake.”

Now Rabiot will likely line up on the left of a midfield three at Al Janoub Stadium with 22-year-old Aurelien Tchouameni in the center, and either Eduardo Camavainga or 23-year-old Matteo Guendouzi on the right.

Tchouameni has impressed for France, but he has played only 14 times for Les Bleus, and never in a major tournament. Neither has Guendouzi, who has made six appearances, or the 20-year-old Camavinga, who has made only four.

For Juventus this season, Rabiot has been scoring and assisting more regularly and taking an increasingly important role that he hopes to transfer to the national team.

“It’s a great responsibility that I’m ready to take up,” he said. “I’d rather be in this position, than not be in this squad.”

A physically imposing player, Rabiot is a strong runner with excellent technique at holding the ball, a good passing range and is strong in the air — something which could trouble Australia’s defense on free kicks and corners.

Real Madrid paid 100 million euros ($97 million) to sign Tchouameni from Monaco in the offseason. In a similar way to Pogba, he is a lean and athletic player with an assured first touch who sprays passes short or long with equal effect.

But Australia has a solid midfield, too, led by the experienced Aaron Mooy — a tough tackler and able passer who played two seasons in the Premier League with Brighton and has made 53 appearances.

Mathew Leckie was Australia’s best player at the 2014 World Cup and poses a threat from the wing. The 31-year-old Leckie is also the national team’s top scorer with 13 international goals.

Leckie and Mooy both started against France four years ago.

“We don’t want to experience the same feeling we had after that game. Even though we won, we didn’t play well enough,” France goalkeeper Hugo Lloris said Monday. “We have to be careful of their set pieces and their transition play is good.”

But coach Australia coach Graham Arnold’s plans for this match were hit when winger Martin Boyle pulled out on Sunday with a knee injury. Boyle has a decent scoring record with five goals from 19 appearances for Australia.

“We all feel for Martin and it is a cruel blow for him,” Arnold said. “He has been an integral part of our journey to get to Qatar.”