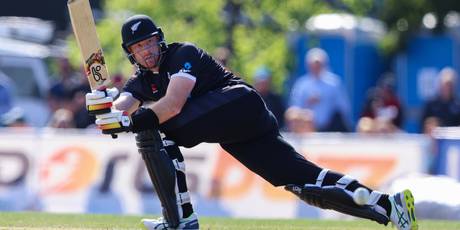 New Zealand Cricket has agreed to release Martin Guptill from his central contract so he can pursue playing opportunities elsewhere.

The 36-year-old opening batsman has been a fixture in Black Caps white ball squads for the best part of 14 years but did not play in the recently completed T20 World Cup, and was not selected for the current T20 and ODI series against India.

Following discussions with NZC, it was agreed Guptill’s request for a release should be accepted, effective immediately.

New Zealand’s leading T20 run-scorer, the third-highest in the ODI format, and third on the world all-time T20 list, Guptill has emphasised he is not retiring from international cricket and still wishes to be considered for Black Caps selection when available.

For its part, NZC has made it clear to him that, while he would remain eligible for selection, preference would continue to be given to those players with central or domestic contracts.

“We understand Martin’s position,” said NZC chief executive David White. “He’s been a fantastic batsman for us for a long period of time, and we certainly don’t wish to stand in his way as he explores other opportunities.

“Martin’s been a giant of the white ball game, a committed and well-respected member of the Black Caps, and has earned the right to play out his career on his own terms.

“He leaves his contract with our best wishes.”

Guptill is the third Black Caps player to request a release this year, after Trent Boult and Colin de Grandhomme, but White said he was comfortable with the existing contracting and selection system.

“Players such as Martin, Trent and Colin, with long and successful international track-records, inevitably end up with alternative playing options at this stage of their careers, and we respect that.

“It’s just part of the natural ebb and flow of individual careers within team sport.”

Guptill said playing for the Black Caps remained his ultimate goal, as it had been for his entire cricketing career.

However, he also wanted to continue playing cricket at the highest level possible – wherever, and for whoever, that might be.

“Playing for my country has been a massive honour, and I’m grateful to everyone within the Black Caps and NZC for their support,” he said.

“But, equally, I’m realistic enough to understand the need to consider my options in the current circumstances.

“With this release, I’m still available for New Zealand, I have the chance to explore other opportunities, and I also get to spend more time with my family – which is important.”

A replacement to fill Guptill’s central contract vacancy will be named in due course.