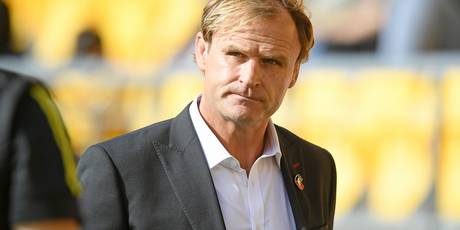 Scott Robertson has met with England officials about succeeding Eddie Jones as coach, a major British newspaper is reporting.

And a recent test star turned columnist says experiencing Robertson’s style first-hand convinced him the Kiwi is perfect for England after next year’s World Cup.

The Mail on Sunday reported it “understands” Robertson is one of the preferred candidates on an England shortlist drawn up by Nigel Redman, a former test lock appointed to identify Jones’ successor.

The short un-sourced story was headlined: “England are holding talks with Scott Robertson…despite the Kiwi coach hoping to take over from Ian Foster and assume the All Blacks hot seat.”

Last week Robertson confirmed his interest in the England role.

“I’ve said it many times that the All Blacks is my preferred choice but if it didn’t work out that way, you know, England’s got so much potential, it’d be a pretty special job,” Robertson told iNews.

“There is potential to any international job, I’ll make that clear, because there’s a few coming up [after the 2023 World Cup]. My first choice is to be at home. And then what other potential, if it is England, Scotland or Australia or any other team that’s out there, you’ve got to look at it.

“I’m in constant contact with the NZRU … But you consider any opportunity in international football because there’s not many of them and it’s a four-year cycle.”

Robertson has been in London to coach the Barbarians, and 72-test England fullback Mike Brown was among those highly impressed.

“I’ve been lucky enough to spend the week with Scott Robertson in the Barbarians camp this week and it’s convinced me that he should be the next England coach,” Brown wrote in the same newspaper.

“I’d heard plenty about his achievements with the Crusaders in New Zealand and he exceeded my expectations.

“What really struck me is how good he is with people. I’ve played for plenty of coaches over the years but I’ve not come across any who bring people together like Scott did this week.

“You feel comfortable with him straight away. You feel like you can have a normal conversation with him and I think England would really benefit from that human touch.

“He connects with people so well and so quickly. Little things like putting one of the quieter lads in charge of the music, so they feel like they’ve got a purpose and belonging in the group.

“Plenty of coaches can do the tactical and technical bits but not many of them are exceptional motivators too. Scott makes it enjoyable and I think that’s exactly what the England team need.

“He encourages you to be yourself and be brave on the field. In a team coached by Robertson, I don’t think (Marcus) Smith would have kicked out the ball for the draw (against the All Blacks) like he did yesterday. It seemed to sum up England’s mindset.”

“I sat with him before (the Barbarians’) match against Harlequins and he had the crowd in the palm of his hand.

“Connecting with the players, the board and the public is all part of the England job. You need to be a figurehead. I think Eddie’s lost a bit of that along the way. He (Robertson) would be a positive disruptor. He would be the perfect successor to Eddie Jones after the World Cup.”